Originally published by news|financial
This interview was conducted by Nico Popp with Power Nickel CEO Terry Lynch on March 8th, 2022 in Toronto, CA

A promising nickel project in Quebec, several gold properties in Canada and Chile, and a license agreement with Teck Resources that could yet provide surprises - Power Nickel's list of activities is long. But the Company is consolidating. As early as the second quarter, historical data is expected to be converted into an updated resource estimate for the flagship NISK project. Shareholders also stand to receive bonus shares later this year. Here is what Terry Lynch, CEO of Power Nickel, has in mind for 2022 and what the Company needs to do to be valued at CAD 800 million instead of CAD 15 million.

[...] Nickel, therefore, benefits twice: firstly from its growing importance within batteries and secondly from the generally growing demand for such storage. [...]

Why nickel is gaining in importance
news|financial: "The composition of batteries is changing. Why is Power Nickel, in particular, a good choice for investors?"
"Because nickel has growing importance for batteries in e-cars - as reported by Nickel.org, the percentage of batteries containing nickel could be 58% by 2025. Years ago, this share was much lower. Nickel is primarily inexpensive and thus replaces other metals. Originally, batteries in e-cars consisted of equal parts nickel, manganese and cobalt. Currently, this ratio is already 5 to 3 to 2. In the long term, i.e. with the advancing technology around batteries, a ratio of 6 to 2 to 2 or 8 to 1 to 1 is also possible. Nickel, therefore, benefits twice: firstly from its growing importance within batteries and secondly from the generally growing demand for such storage."
"But let me come to Power Nickel and thus to the core of your question. On the world market, a distinction is made between Class 1 nickel and Class 2 nickel. The latter is not suitable for use in batteries for e-cars. Recycled nickel also belongs to this category. Power Nickel's NISK project stands for Class 1 nickel and should benefit from all electromobility and energy storage trends."
Unique selling points of NISK
news|financial: "Your NISK project points to positive economic framework data. What makes the project stand out?"
"The geographical location and the legal framework alone are outstanding. NISK is located south of James Bay in the Canadian district of Quebec. The Fraser Institute considers the region the sixth-best for mining raw materials. The evaluation takes into account subsidies and tax conditions as well as geological features. There are three advanced mining projects within 100 km of our property. Ten kilometers from NISK is the already commissioned Nemaska Lithium Mine. This density of resource companies also ensures that the infrastructure is good. It includes roads, energy, and mining-related service providers. Not far from our project, there is a hydroelectric power plant that can provide clean and, at the same time, cheap electricity. The sustainability aspect is becoming increasingly important when we think about raw materials for the production of e-car batteries. We are positioning ourselves sustainably from the outset and are convinced that this will enable us to win over the market."
The big plan around the NISK project

[...] The historical estimates are for about 3 million tons of nickel at NISK. We believe we can more than triple that number in the medium term and end up with a project that will convince the market and attract interest from mining companies [...]

news|financial: "What stage of development is NISK in today?"
"We have just recently released drill results. The results are in line with expectations and are part of a plan to release an updated NI 43-101 resource estimate by the second quarter of this year. At NISK, we are very fortunate in that we only need to transfer historical data. To do that, we test parts of the drill holes from that time and confirm the results. In the end, we can use parts of the historical data and save capital. It is safe to assume that this process will cost about CAD 7 million less than drilling from scratch. The historical estimates are for about 3 million tons of nickel at NISK. We believe we can more than triple that number in the medium term and end up with a project that will convince the market and attract interest from mining companies."
Pending drill results
news|financial: "What can investors expect from the second tranche of drill results?"
"First of all, I would like to emphasize that we do not build suspense when it comes to drilling results - we release results in the order in which they come to us from the lab. The pending results could represent higher grades than historical data, but I don't want to prejudge the specific numbers that we will be reporting in the coming weeks. The resource estimate we will publish in the second quarter will be a landmark for many investors. Today, many market participants are not yet familiar with Power Nickel. Given the lack of a resource estimate, we may fall through the cracks with one or two investors. However, this phase will be over in the foreseeable future. We are looking forward to pushing ahead with the exploration based on a current resource estimate and making the vision around NISK plausible to the market."
Talon Metals as a role model?

[...] Talon Metals is valued at CAD 500 million; extrapolated to the entire project, this would be around CAD 800 million. Power Nickel is currently valued at only around CAD 15 million. [...]

news|financial: "Are there examples that show where the journey for Power Nickel could go?"
"Talon Metals shows us what the future of Power Nickel could look like. The Company has access to 60% of a nickel project that offers 10 million tons of nickel at grades of 2% nickel equivalent. We believe it is also possible to achieve these benchmarks. Talon Metals is valued at CAD 500 million; extrapolated to the entire project, this would be around CAD 800 million. Power Nickel is currently valued at only around CAD 15 million. Of course, we are quite a bit away from Talon Metals' resource, but the market should keep in mind that 3 million tons have already been historically confirmed and that we intend to confirm this size by current standards soon. For those of us who know the NISK project, the stock's potential is great. Soon, the market should see it that way too."
Power Nickel's role in a complex world
news|financial: "What role does the increasing regionalization of supply chains play in Power Nickel's opportunities?"
"Currently, Canada accounts for about 6.7% of global nickel production. Since batteries and e-cars are built on the continent to be sold here, it also makes sense for producers of these industrial goods to buy raw materials on the continent. The current events in Eastern Europe or even the accident in the Suez Canal show that supply chains must be not only flexible and efficient but also robust. With our site in Quebec, we offer these advantages. The high standards around environmental protection and ESG, in general, are also unique selling points that differentiate us from many companies in other regions of the world."
Gold and copper activities to go public separately

news|financial: "You have gold and copper operations in Canada and Chile. Briefly describe the properties in your portfolio and what the planned spin-off is all about."
"In British Columbia, we operate Golden Ivan, a promising property in the Golden Triangle. Our project is located between Strikepoint Resources in the south and Scottie Resources in the north. The Ascot mine is also not far away. Just recently, we were able to release rock sample results that showed 15 grams of gold per ton. No drilling has ever been done on Golden Ivan. But whenever our neighbors have come closer to our property, the grades have gone up. We are happy to have this project."
"In Chile, we also have three other projects in which we have 100% interest. Zulema is located in the Atacama Belt, Palo Negro and Hornitos in the Atacama Province, and Tierra de Oro in a well-known iron-copper-gold region. We will spin off all these projects in Canada and Chile into a company called Consolidated Gold & Copper at the end of the year. Existing shareholders of our Company are to receive shares. However, Power Nickel will retain an 80% interest in Consolidated Gold & Copper for the time being because we believe the current valuation level is extremely low. All projects are promising. Just before Consolidated Gold & Copper shares are scheduled to come to market in the fourth quarter, we also plan to release the results of the first drill program at Golden Ivan, which we have planned for the third quarter. As you can see, we have a lot planned for 2022. A lot of what we are doing will change how the market looks at our projects."
NSR at Teck

[...] The NSR is not a reason to invest in our Company. However, the day may come when these rights make our lives much easier. [...]

news|financial: "You still have a net smelter return (NSR) from Teck Resources in Chile. How did that come about, and what is it all about?"
"Before I was at the Company, we invested over $20 million USD in a prospective copper-molybdenum project that impressed with resources of 200 million tons. Unfortunately, the market for such projects collapsed at the time, and we had to part with the project for a low amount. Teck took it over and granted us a 3% NSR in addition to a $3 USD million payment. One-third of this can be bought from us by Teck for an amount of USD 3 million. The remaining 2% will remain with us in any case. Since the activities around the project have been postponed time and again at Teck, our only option is to wait. The NSR is not a reason to invest in our Company. However, the day may come when these rights make our lives much easier."
Financing
news|financial: "Outstanding warrants could also play such a role. How do you ensure that you can access financial resources exactly when you need them?"
"Last May, we did a financing round at 25 and 40 cents for flow-through shares. The premium through the flow-through process was about 60%. This procedure in the District of Quebec offers growth companies like us the best conditions. We have warrants outstanding with an equivalent value of CAD 4 million. We expect that mainly long-term investors will exercise them at prices above the CAD 0.30 mark. We, therefore, have no immediate need for capital. Consequently, we can structure further measures to offer the best possible conditions for our existing shareholders."
Roadmap for 2022

[...] First, we will announce the remaining drill results from our drilling in the first quarter, and then we will release a new 43-101 resource estimate for NISK in the second quarter. [...]

news|financial: "You have a lot planned for 2022, including releasing a resource estimate for NISK and exploring promising areas. To recap at the end: What is the roadmap for 2022?"
"First, we will announce the remaining drill results from our drilling in the first quarter, and then we will release a new 43-101 resource estimate for NISK in the second quarter. We then expect to enter a second phase of drilling at the end of the second quarter and report in the third quarter. Beyond that, we expect our spin-off to be approved in the second quarter, and we will complete the move in the third quarter. We intend to complete the first drill program at Golden Ivan in the third quarter and report on it in the fourth quarter to provide a direct tailwind to the new Company. Then in November, we have the third drill program on NISK pending."
news|financial: "Thank you very much for talking to us." 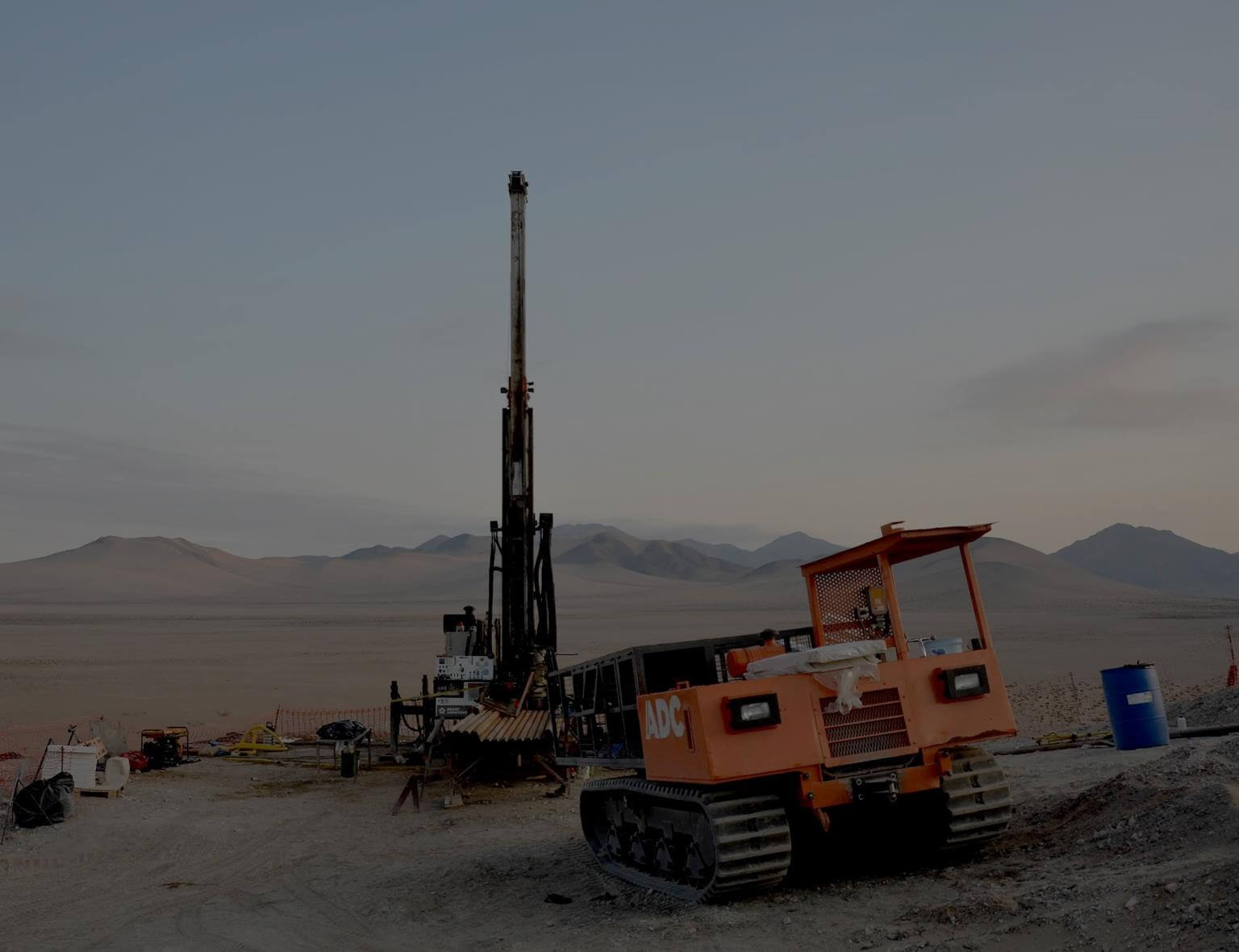